Sasol continues to respond to the needs of its communities, on 31 January 2022 Sasol in partnership with 2 Sasol Retail Convenience Centre (RCC) franchisees Andrew Maphetho RCC and Sasol Tembisa RCC handed over school uniform kits to over 70 children from five primary schools in Tembisa.

This initiative to support the children is funded under the umbrella of Sasol’s Friendly Neighbour retail social impact initiative and, in this instance, addresses needs identified in families impacted by the COVID-19 pandemic and the job loss devastation following the July riots.  Beneficiaries include learners from Gahlanso, Moduopo, Umthambeka, Welamlambo and Simphiwe Primary Schools in Tembisa.  The selected learners received a school uniform kit-bag containing shoes, a jersey, socks, tracksuit set, pants for boy and tunics for the girl learners, and a school bag each.

Leading up to the donation, Sasol Energy Business and its Tembisa franchisees engaged the Ekurhuleni Department of Social Development and various non-governmental organisations to identify generally underserved households and child-headed households in Tembisa that would need support in the form of school uniforms.

According to Palesa Mokaba, Vice-President of Marketing for Sasol’s Energy Business, many families were affected by hard lockdowns associated with the COVID-19 pandemic – the social unrest that followed in July 2021 was yet another blow for struggling families. “The beginning of the academic year posed yet another challenge for these families who had to secure school uniforms which Sasol has now provided to bring some relief and to serve as encouragement for young and talented learners”, said Mokaba.

“As Franchisees we are delighted that, through the Friendly Neighbour Initiative, we are able to partner with Sasol to be a force for good in our fenceline communities”, says David Pooe, franchisee at Sasol’s Andrew Maphetho RCC.  “The initiative is about co-creating socio-economic activities within a specified radius of a Sasol RCC focusing on community development programmes such as health, environment and work skills development”, Pooe added. 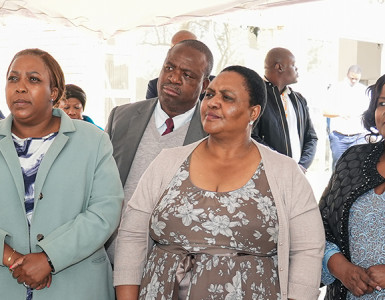 Sasol has launched Bridge to Work (BtW), a portfolio of initiatives aimed at improving food security and reducing unemployment in its communities across the country. This is by developing emerging farmers and improving... 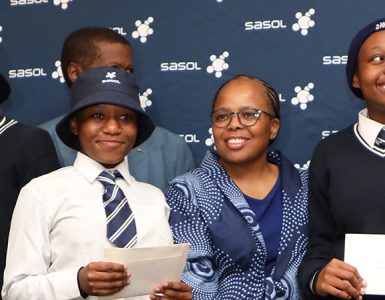 Two schools from Secunda have emerged victorious in the final level of the Sasol Energy Innovation Schools competition, which took place at Carnival City Casino, East of Johannesburg on 08 September. The two schools... 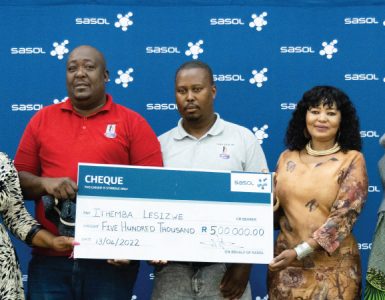 Ithemba Lesizwe is a non-profit organisation (NPO) based in eMbalenhle, Govan Mbeki Municipality, that helps young people to fight drugs and substance abuse. Celebrating six years since its establishment, Ithemba...